Explore This Excursion Below:

I'm so excited to share this destination post on Barbados with you. This island is amazing! Spoiler alert, the beaches are amazing! 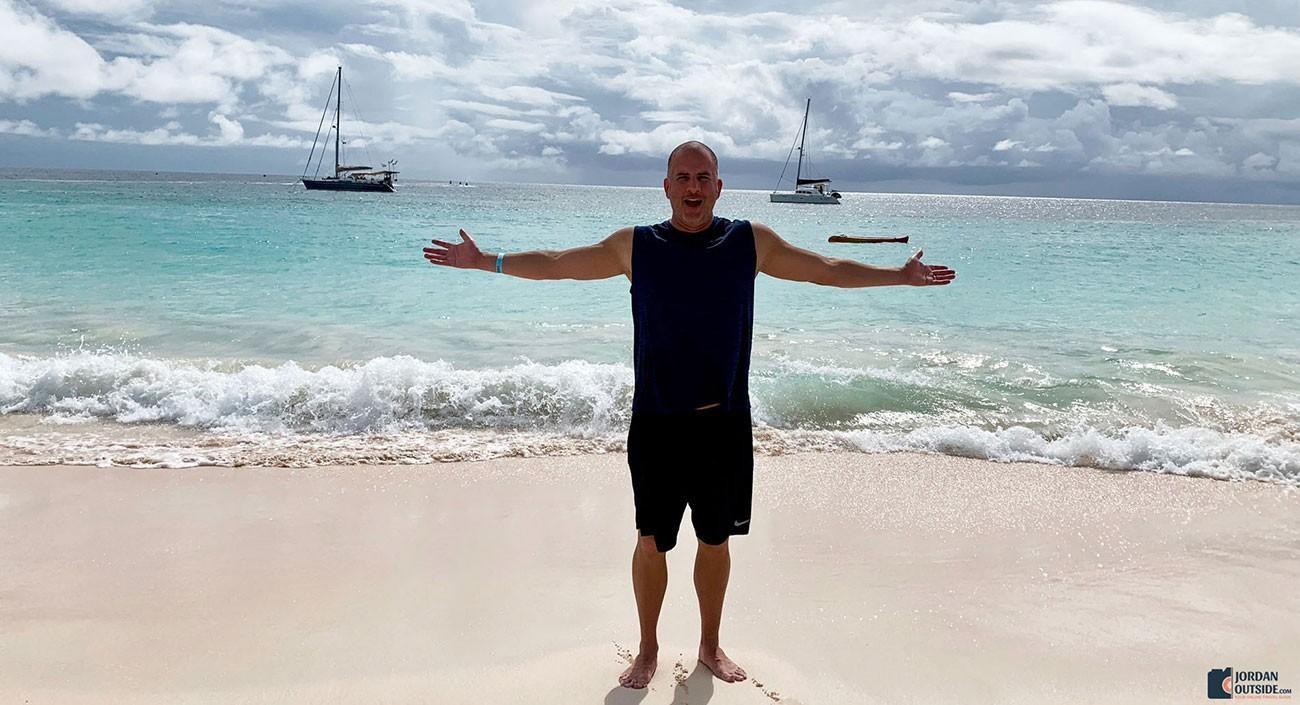 We arrived at the island of Barbados on our Carnival Cruise Ship (Fascination). We docked at the port in Bridgetown. As Julie and I got off the ship, we saw the longest dock/pier we had seen so far. They gave us the option to take a shuttle bus or to walk to the port’s terminal. We opted to walk and got to see some of their tug boats up close. 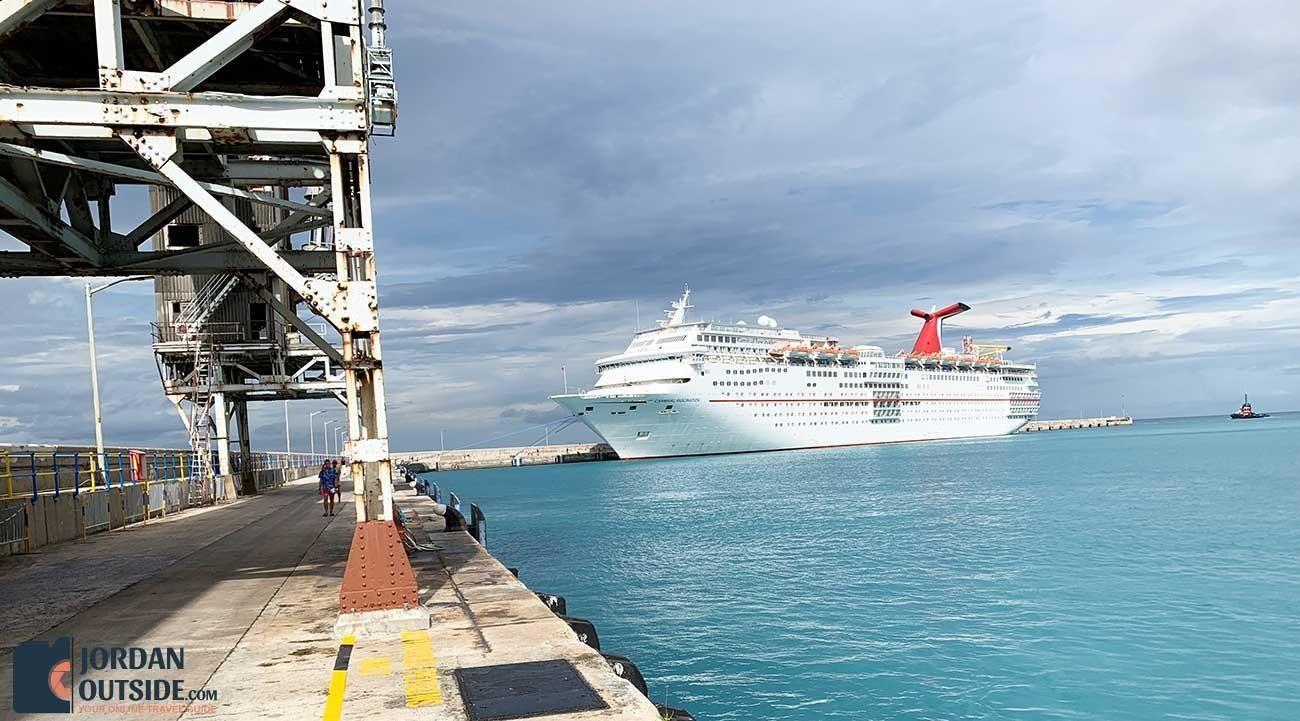 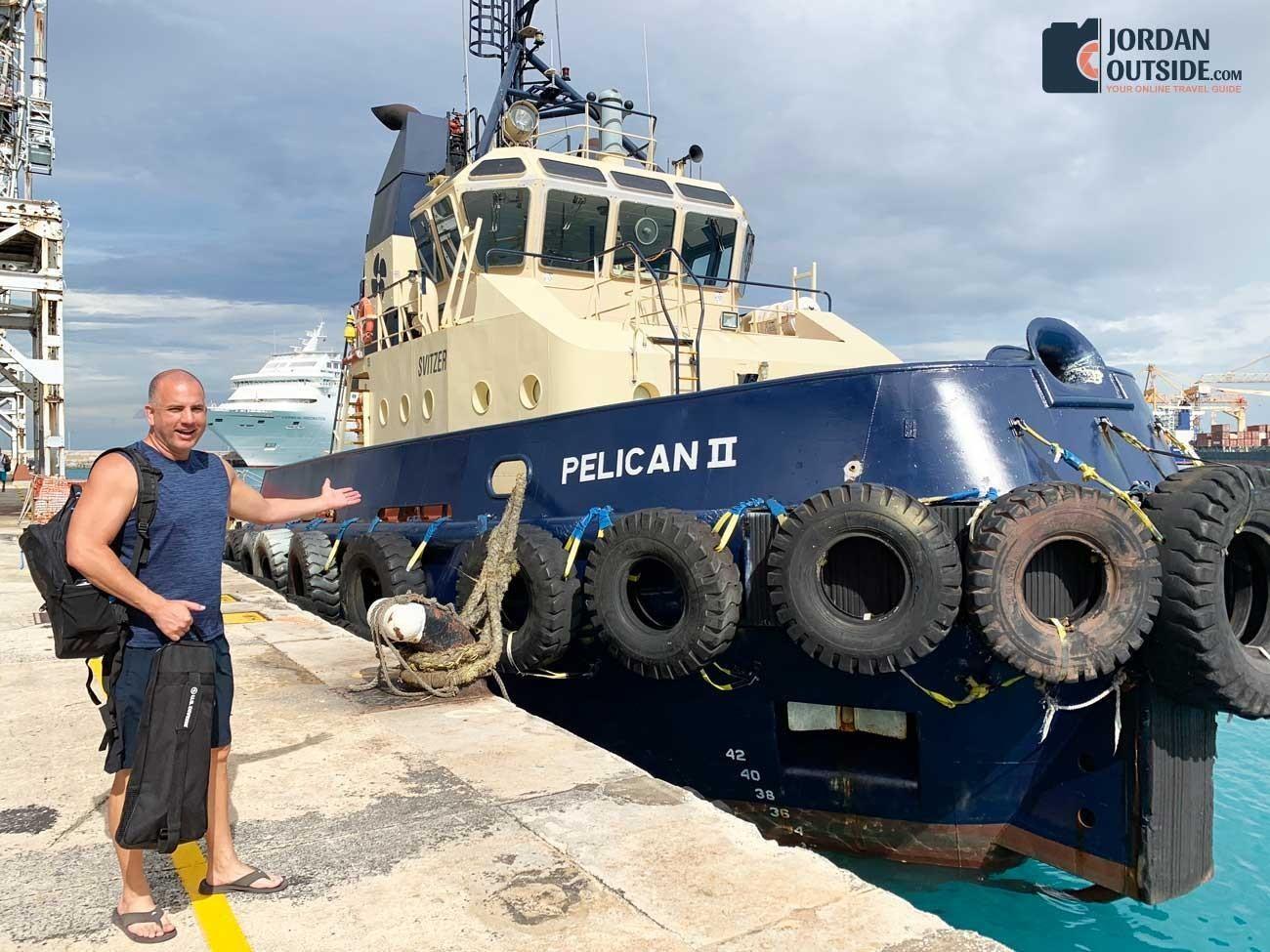 It took us about 10 minutes to walk to the Barbados Port Terminal. Right in front of the port terminal is a big sign that says “Welcome to Barbados”. This is a great place to take a pic. After taking our “Welcome to Barbados” pic, we entered the U shaped terminal. This terminal is filled with souvenir shops. At the end of the terminal there are 2 exits. One is for pre-arranged excursions and the other is to the taxis. For those who wanted to walk, there is a sidewalk that goes all the way into Bridgetown. 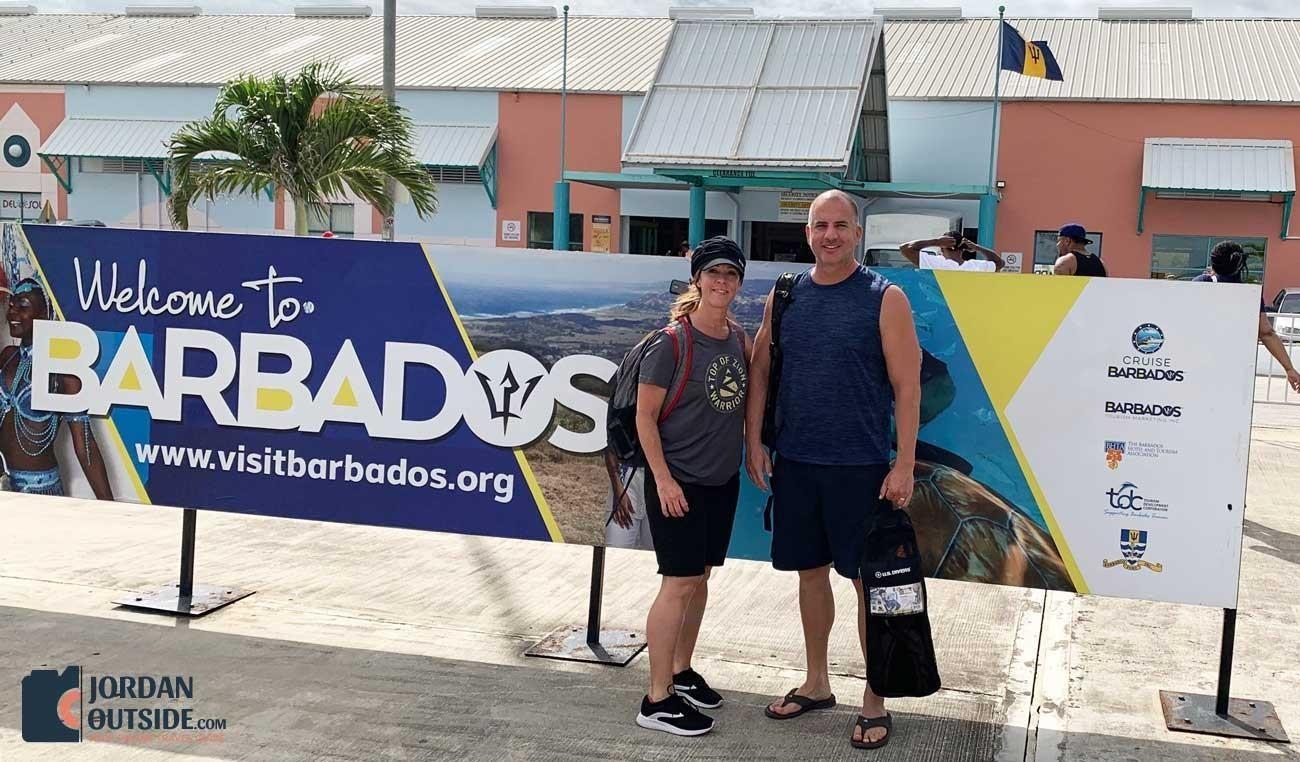 We booked the Ultimate shipwreck snorkel excursion through Expedia’s Shore Excursions Group, which booked it with Glory Tours. We booked this excursion online before we got on the cruise ship.

Description of Excursion: We left the port terminal on our shuttle bus and headed to Pirate’s Cove at Carlisle Bay. Our bus driver gave us a tour along the way pointing out significant landmarks.

When we got to Pirate’s Cove, we were welcomed by Tricia. She was so nice and helpful. We got the all you can drink wrist bands and two $10 buffet cards as part of our excursion that we used when we got back from our snorkeling excursion.

She introduced us to Ronaldo, our Ultimate Shipwreck snorkel guide. Ronaldo was awesome! He was so excited to share the beauty of Barbados with us. We went out of the Pirate’s cove building and there is a large covered pavilion, a bar area, and bathrooms. Don’t forget to get your pic with the Jolly Roger. See below. 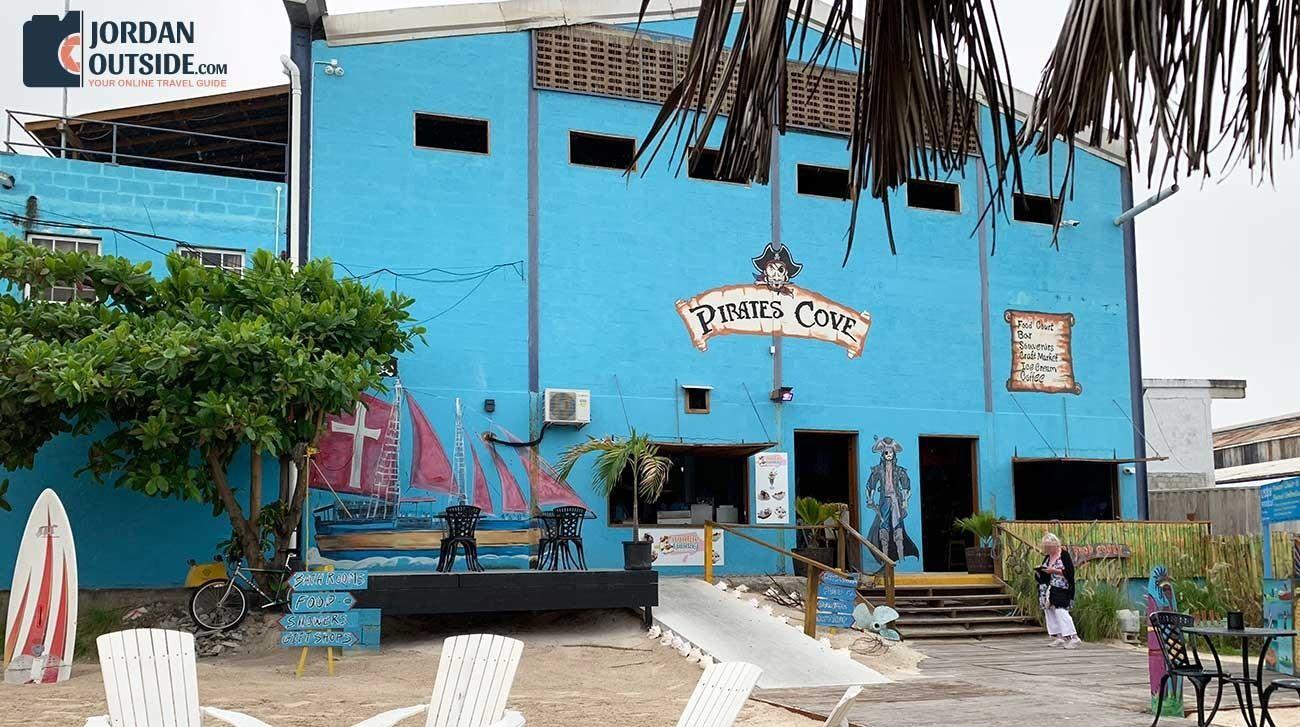 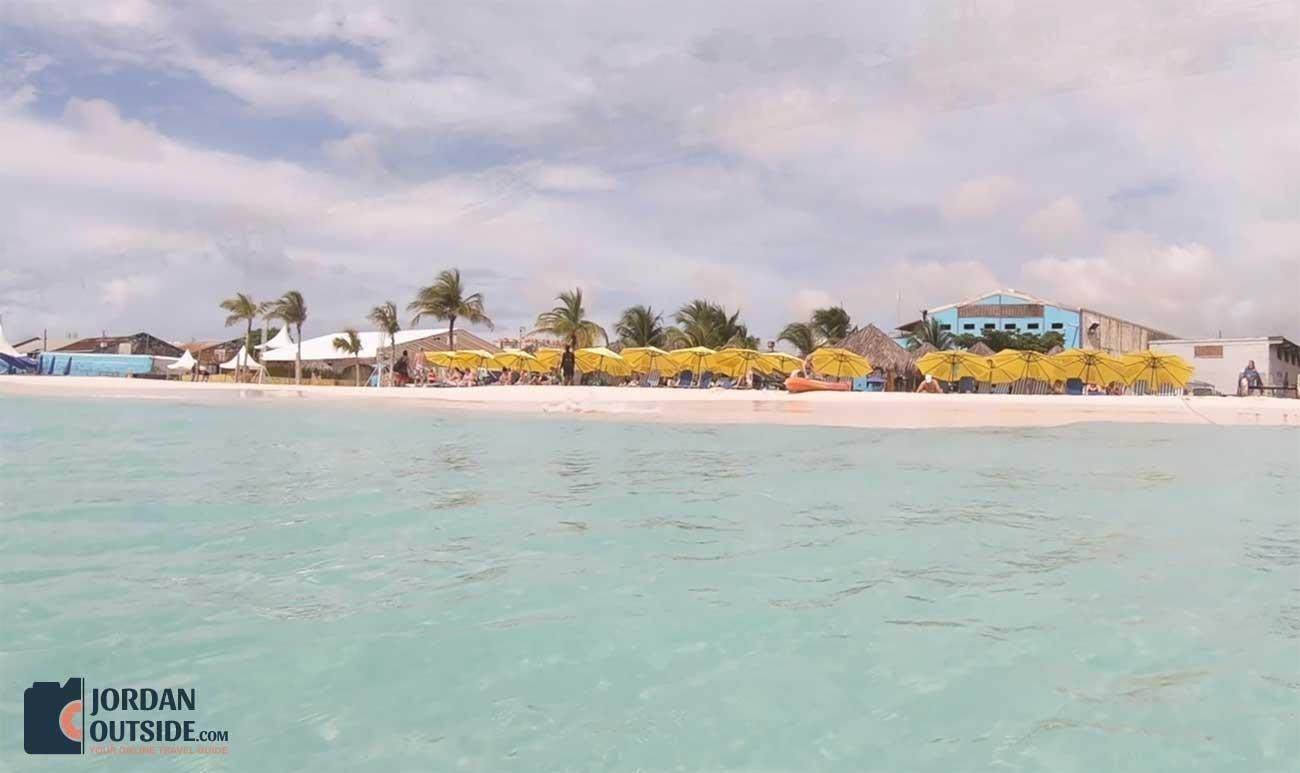 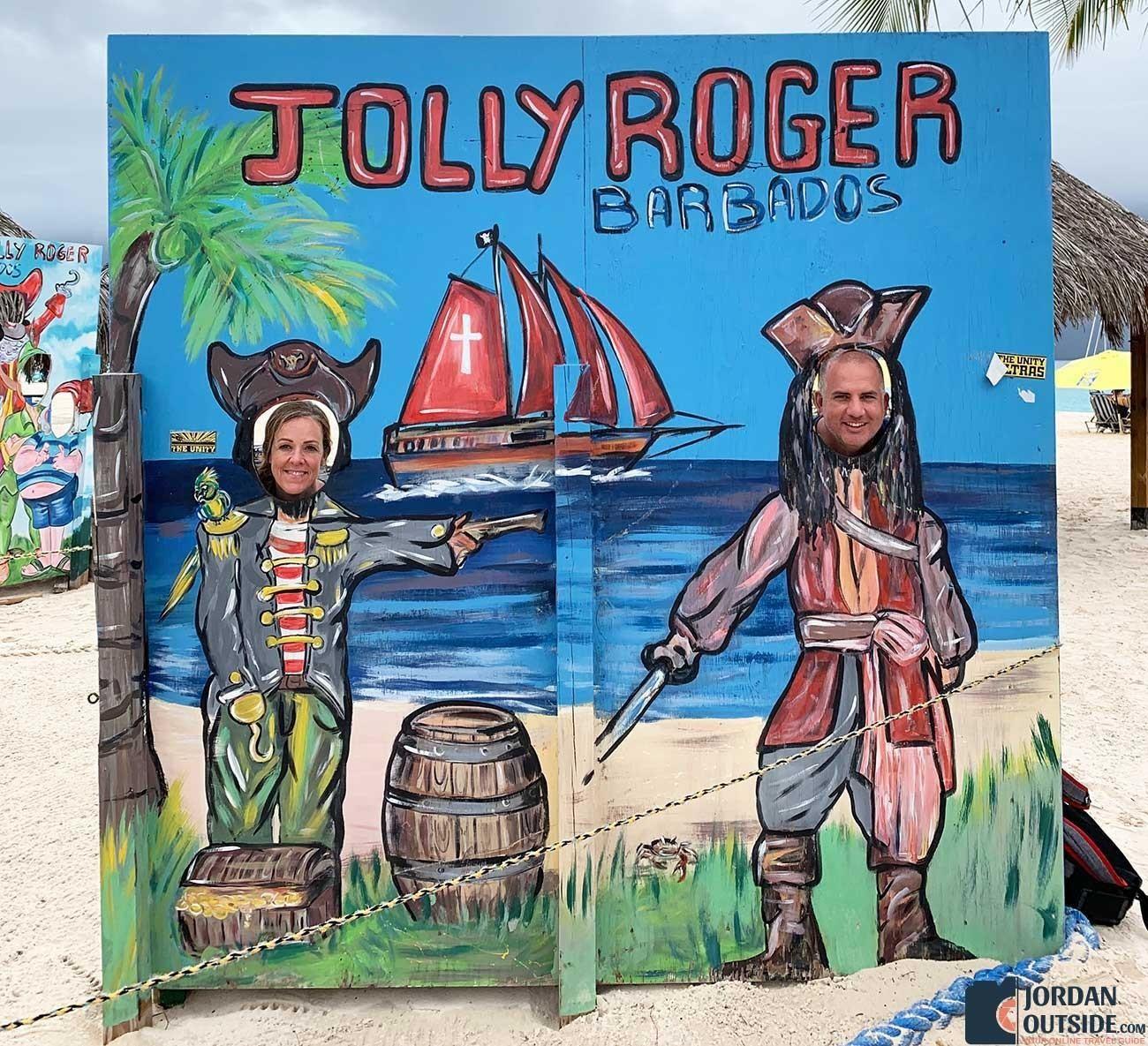 From the pavilion area it leads out to a beautiful beach with the softest sand. No shells or rocks in the sand! It has to be the softest sand I’ve ever walked in. A storm started to roll in, so we waited under the covered pavilion until it started to let up. 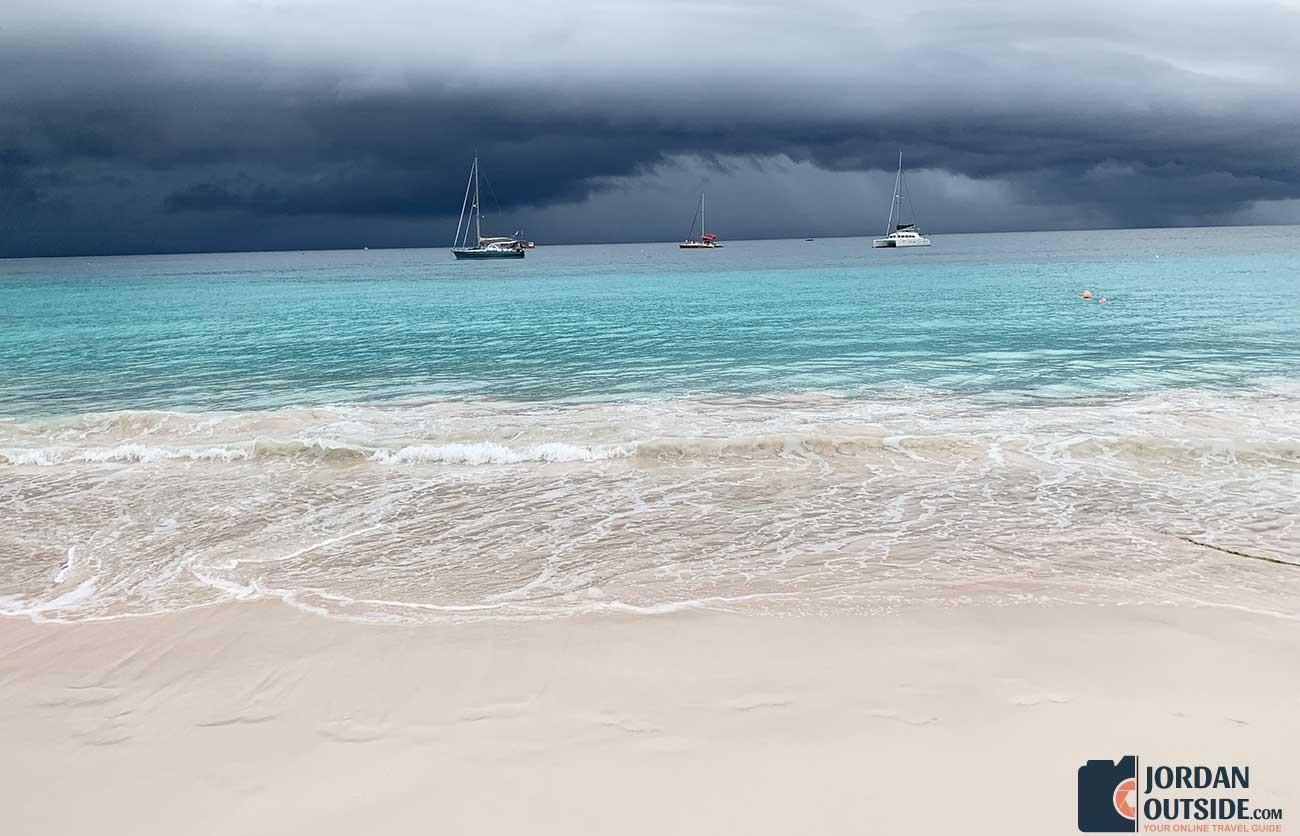 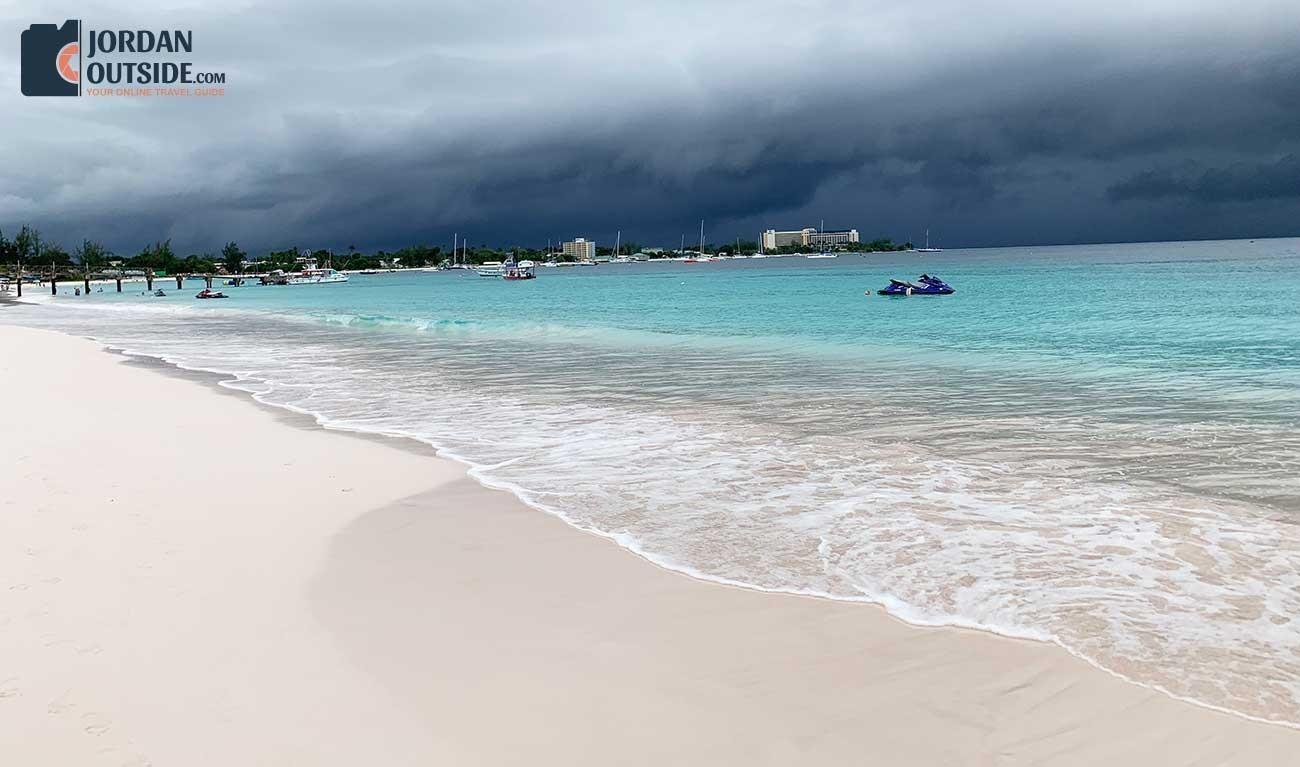 The rain began to let up, so Ronaldo took our group out to the boat. This 2-story boat was great because it covered us from the rain. The boat was advertised as a glass bottom boat, but it only had two windows in the middle of the boat. I was expecting the whole floor to be glass, but instead it was two windows. Not a big deal, but worth noting. 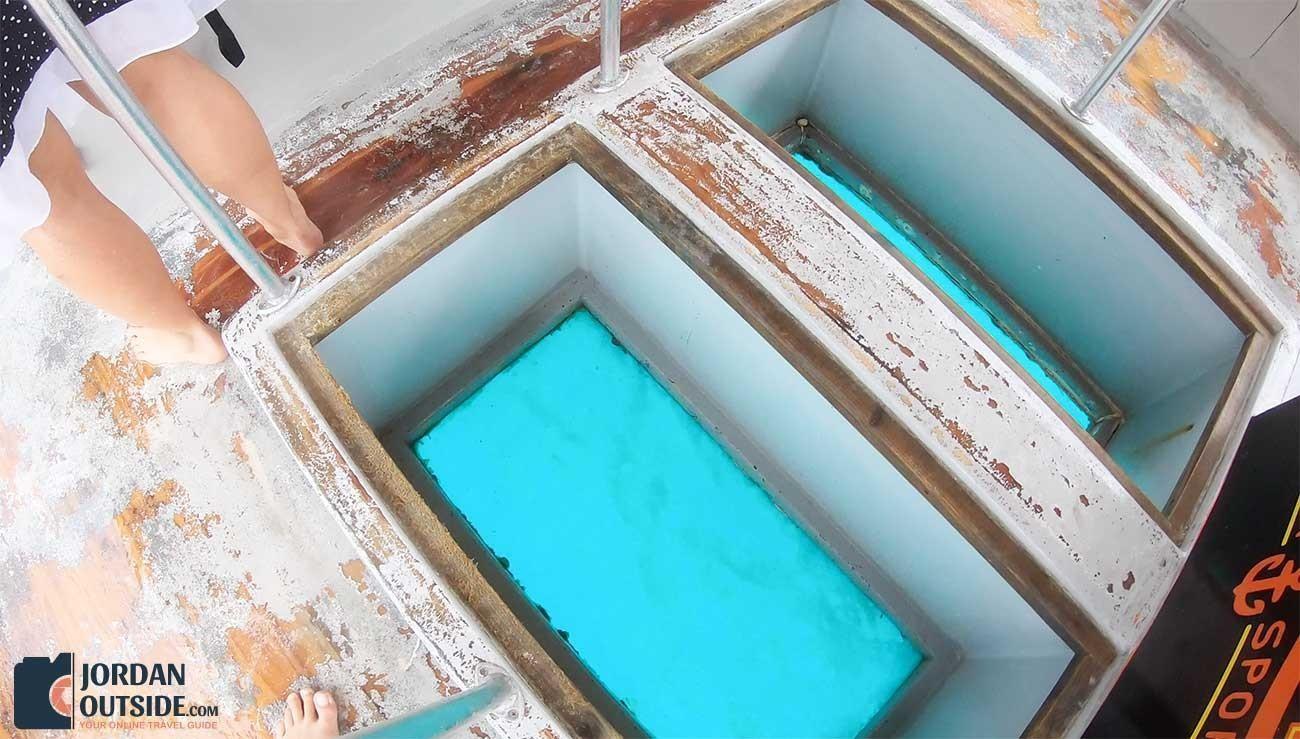 Here's the full video of The Ultimate Shipwreck Snorkel Excursion:

We took the boat out to our first stop to explore a shipwreck. We brought our own masks and snorkels. Julie brought her own fins, but I didn’t because I thought they would have extra fins. They didn’t have extra fins so our snorkel guide, Ronaldo, gave me his fins without thinking twice about it. Such a generous guy.

We jumped in at our first stop and began exploring the ship wreck. I was able to dive down with my GoPro Hero 7 Black to take videos. 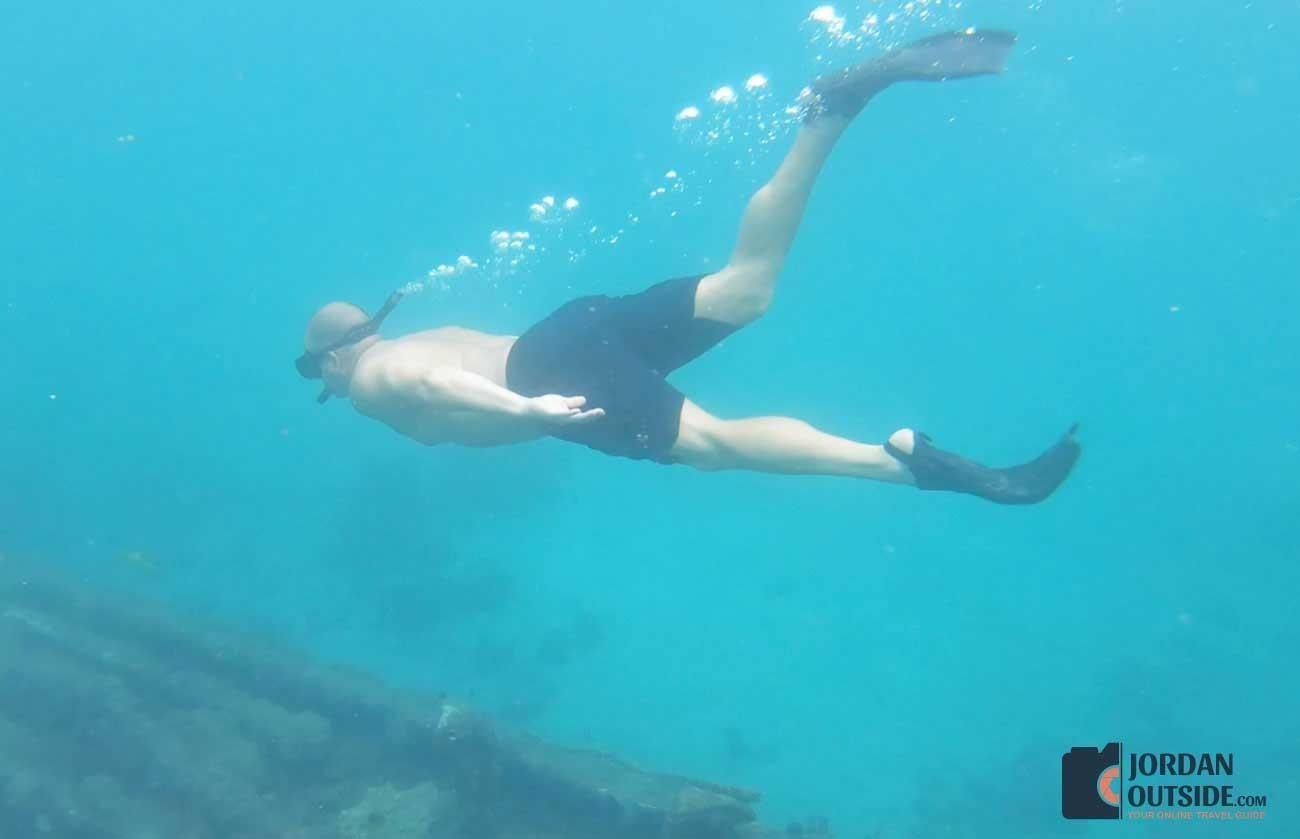 Ronaldo (see pic below) pointed out a rotary phone that someone had dropped down to the bottom. This was a deeper point. I tried going all the way down, but my ears hurt and I wasn’t able to pressurize them. Ronaldo took my GoPro down for me and filmed it. He also took my camera on one of the shipwrecks and swam through it for me. To say he was an amazing snorkel guide doesn’t do him justice. 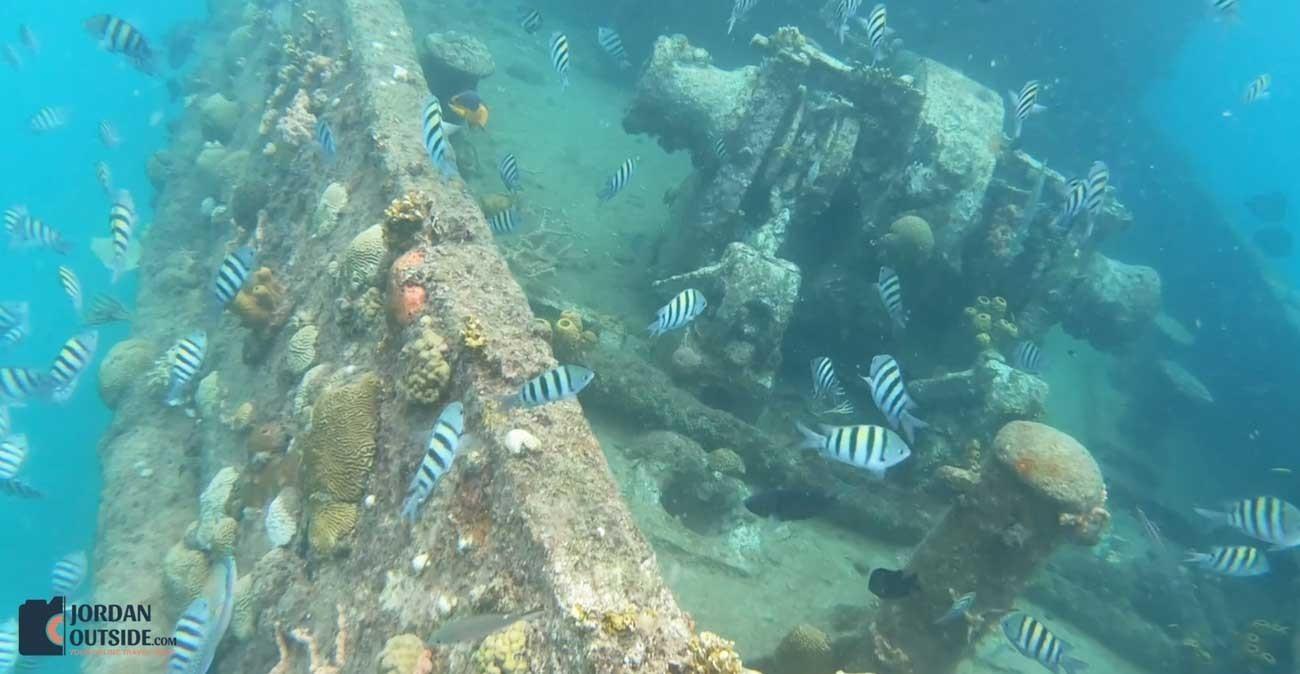 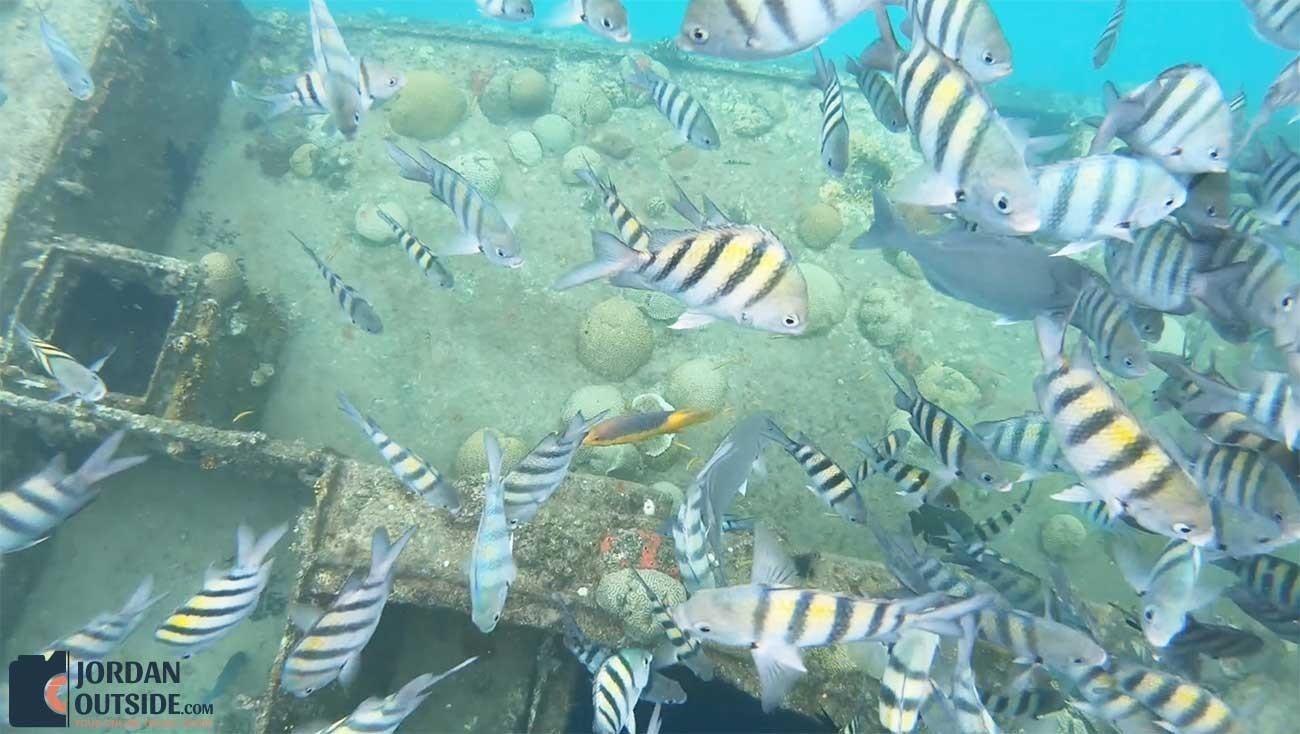 We then got back into the boat and went over to an area where some turtles hang out. We saw a big turtle and a baby turtle within minutes. Our snorkel guide, Ronaldo, brought some food to feed the turtles. I also saw some sting rays and a flying fish. 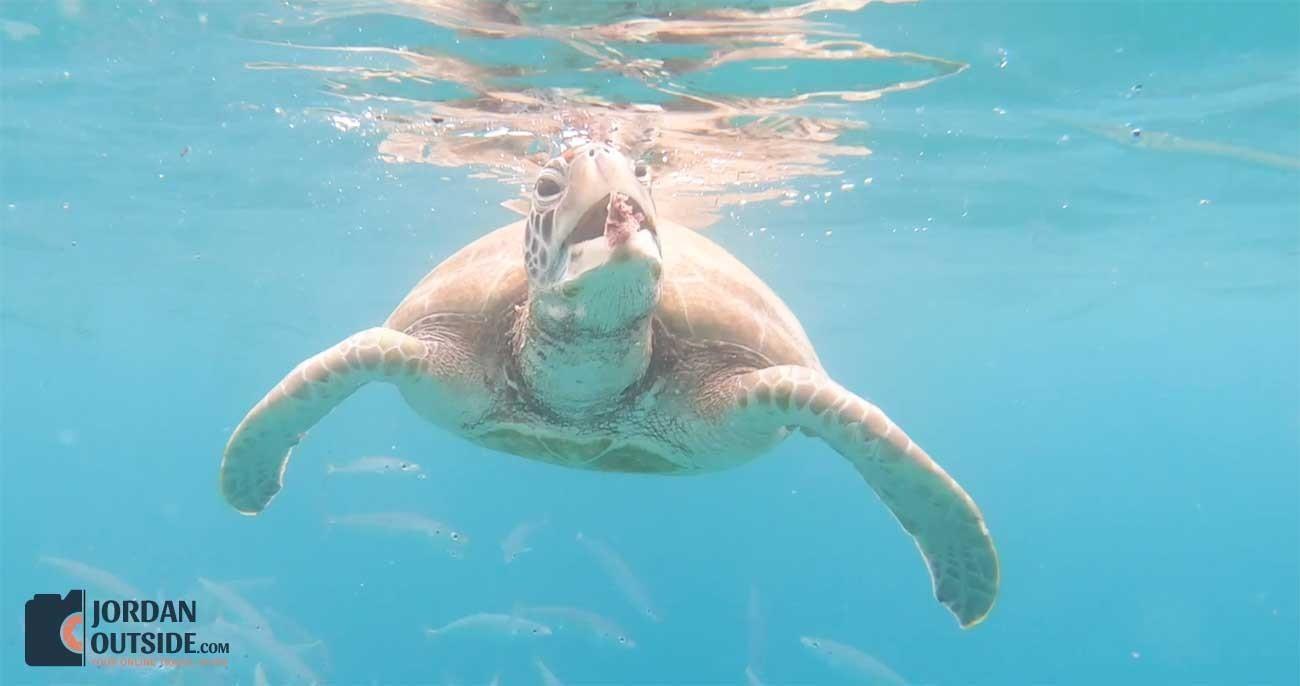 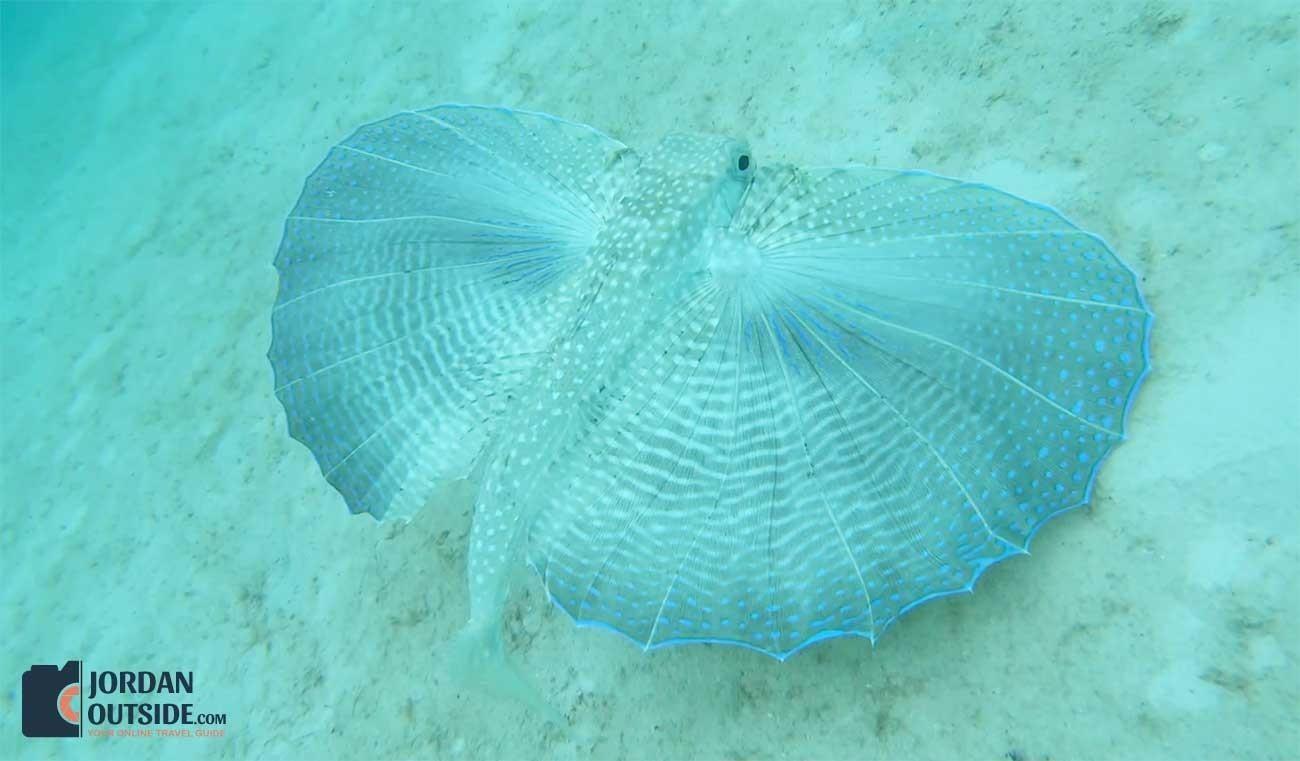 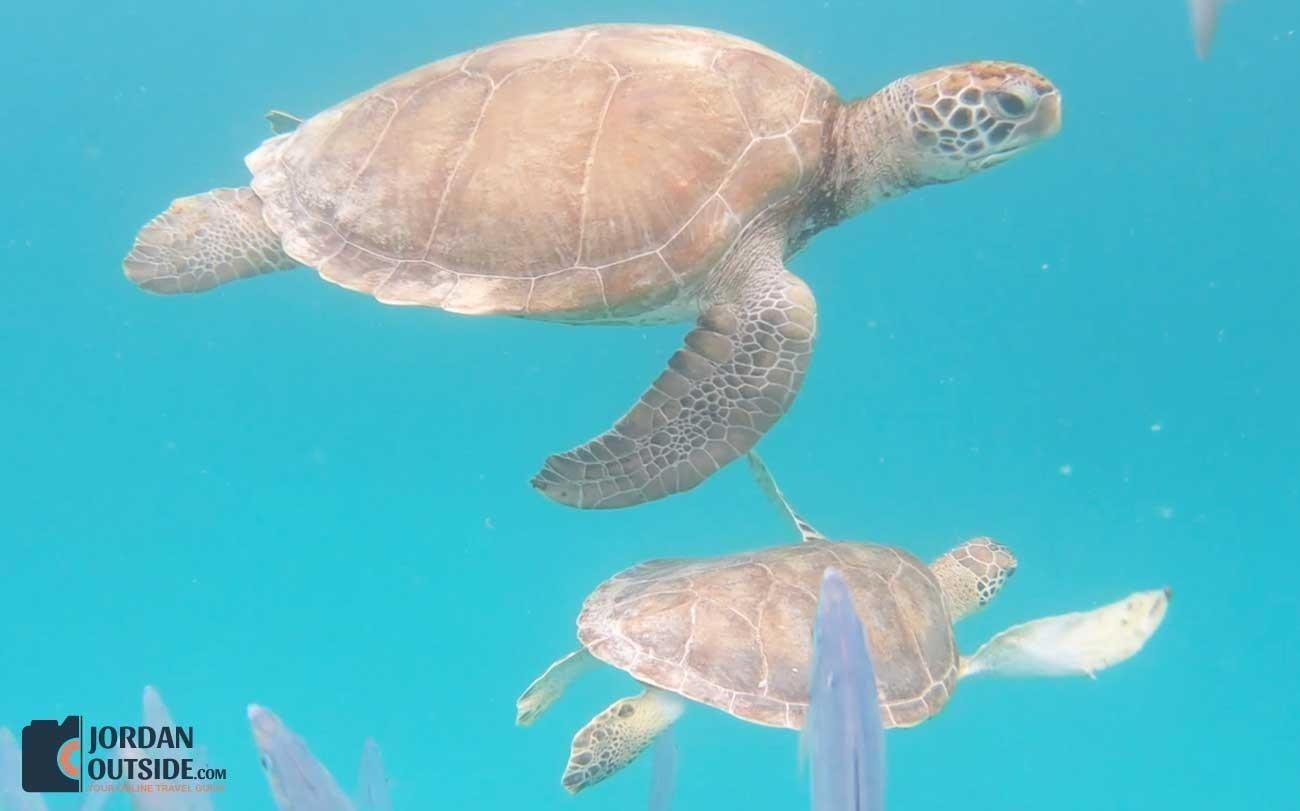 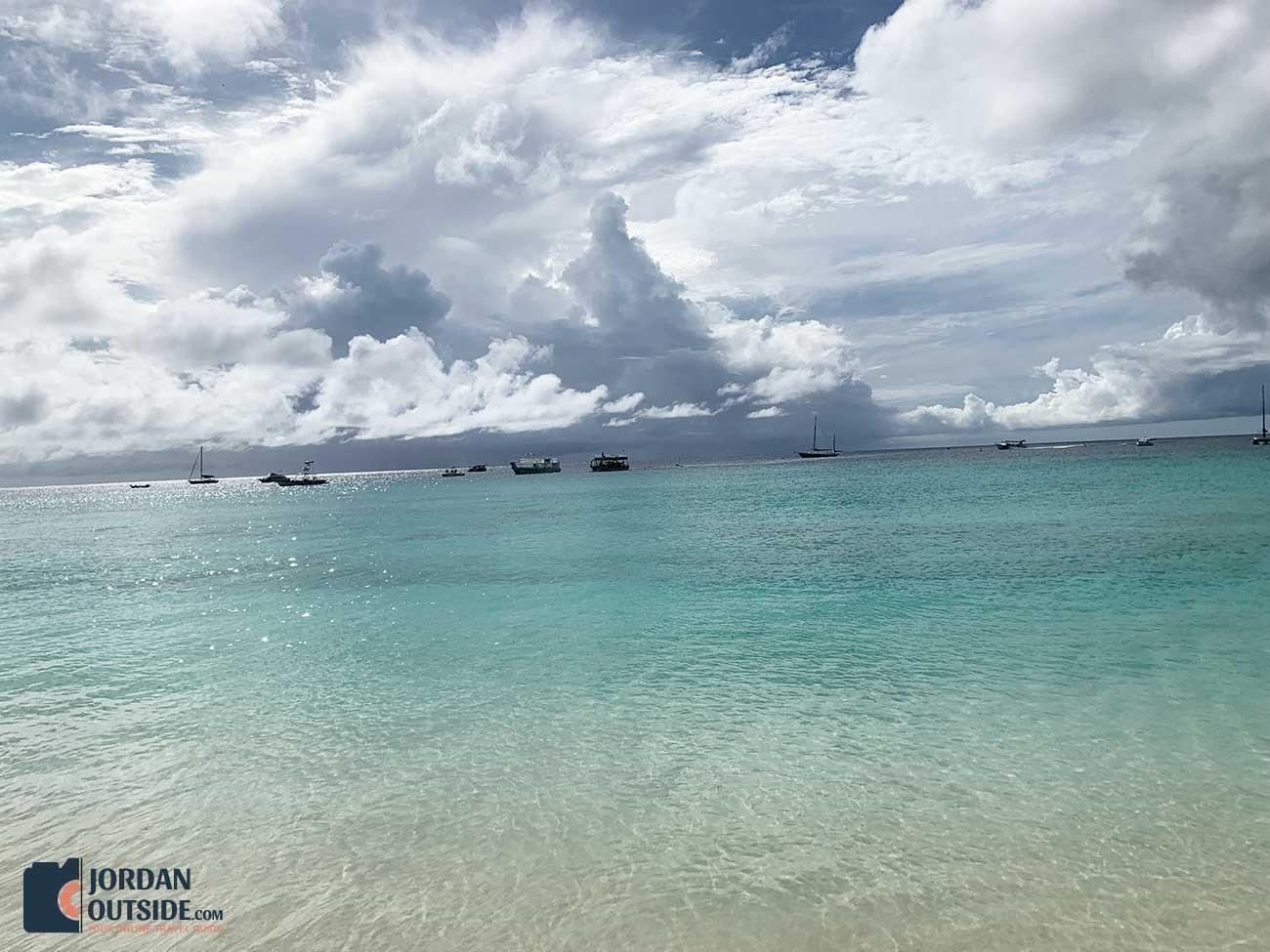 We then wrapped it up and headed back to the beach. The rest of the day was sunny. We used our buffet passes and ate. I got the rice, plantains, and chicken wings. It was really good.

We swam some more, laid out, and then went back inside at 3:30pm to catch our shuttle bus at 3:45. The shuttle bus took us back to the port of Barbados. We did a little bit of shopping at the terminal and then walked back to our Carnival Cruise ship. We enjoyed a beautiful sunset as we were getting ready to set sail. 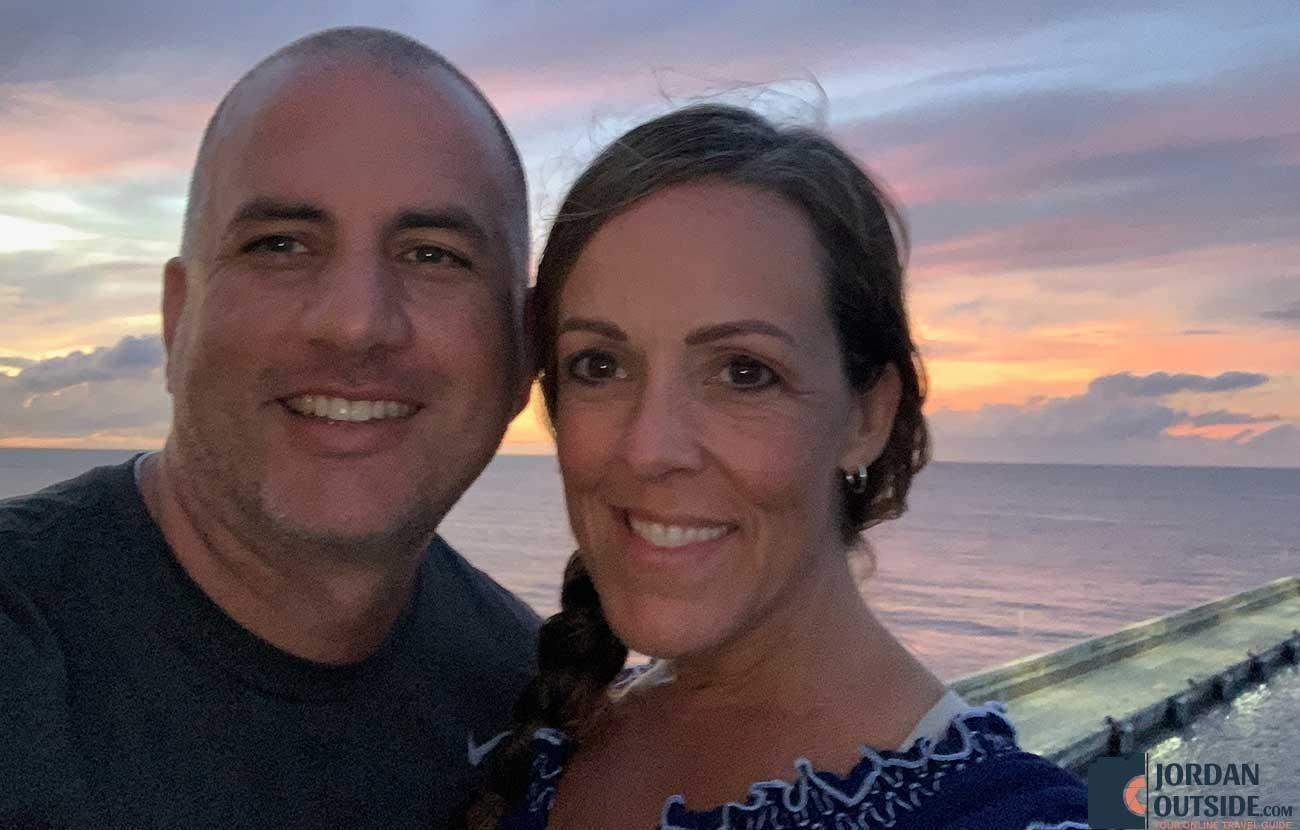 Once back on the ship, we got cleaned up and went to the pool deck and got some delicious hamburgers and fries. We played 2 rounds of miniature golf and then went and got dessert. We found out that we could do laundry on the 6th floor of the ship. It was coin laundry, so we went to the casino and got $10 worth of quarters. We also bought the detergent and fabric softener with quarters in the laundry room. 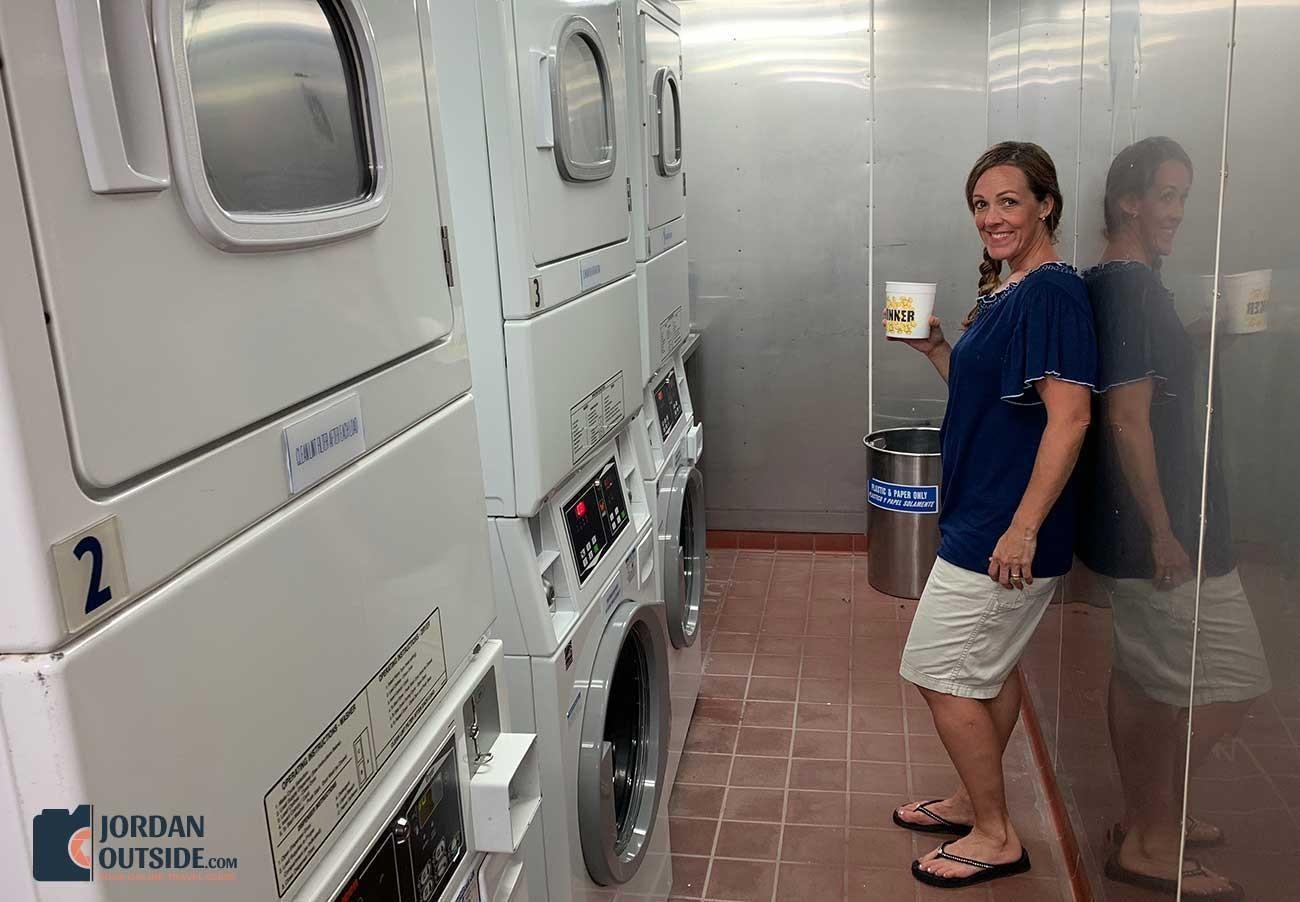 Overall, Barbados has been our favorite island so far. The people were friendly, the streets are pedestrian friendly with sidewalks, the beaches are amazing and clean, and our excursion was so fun! We love Barbados. We also didn’t have to spend any money on food or taxis because it was included in the excursion. We tipped our bus driver $3 on getting back to the cruise ship terminal. I would have like to spend more time exploring Barbados, but the one day we had in paradise was amazing! 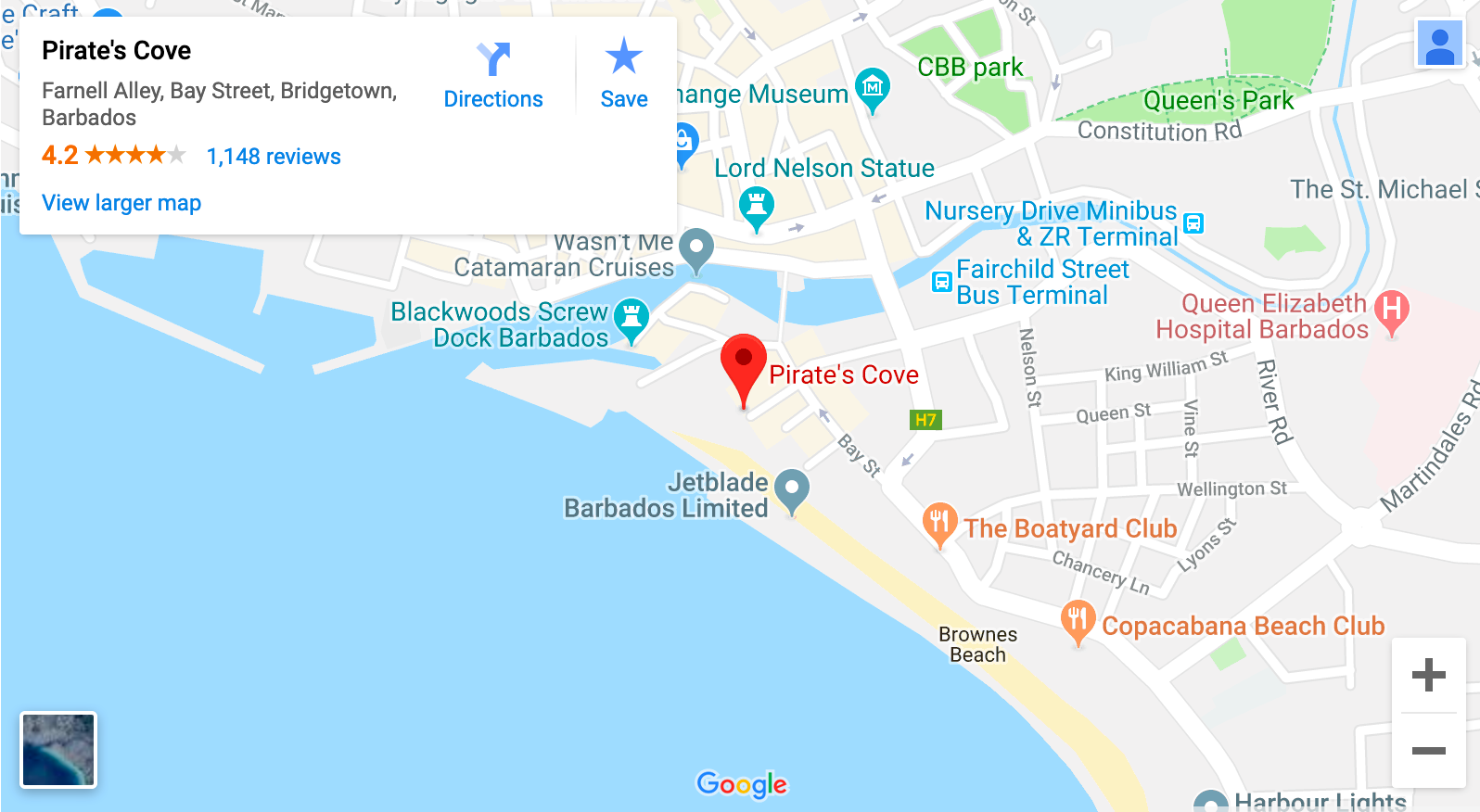 (Click on the map above to go to a Google Maps larger view.)

We also gave a $3 tip to the taxi/bus driver.

It was so nice to have paid for this excursion before our trip because it reduced the amount of cash that we needed on hand for the excursion. We had cash on hand, but only spent $3. We bought souvenirs at the port terminal, but used our credit card instead of cash.

Here’s the receipt from Shore Excursions: 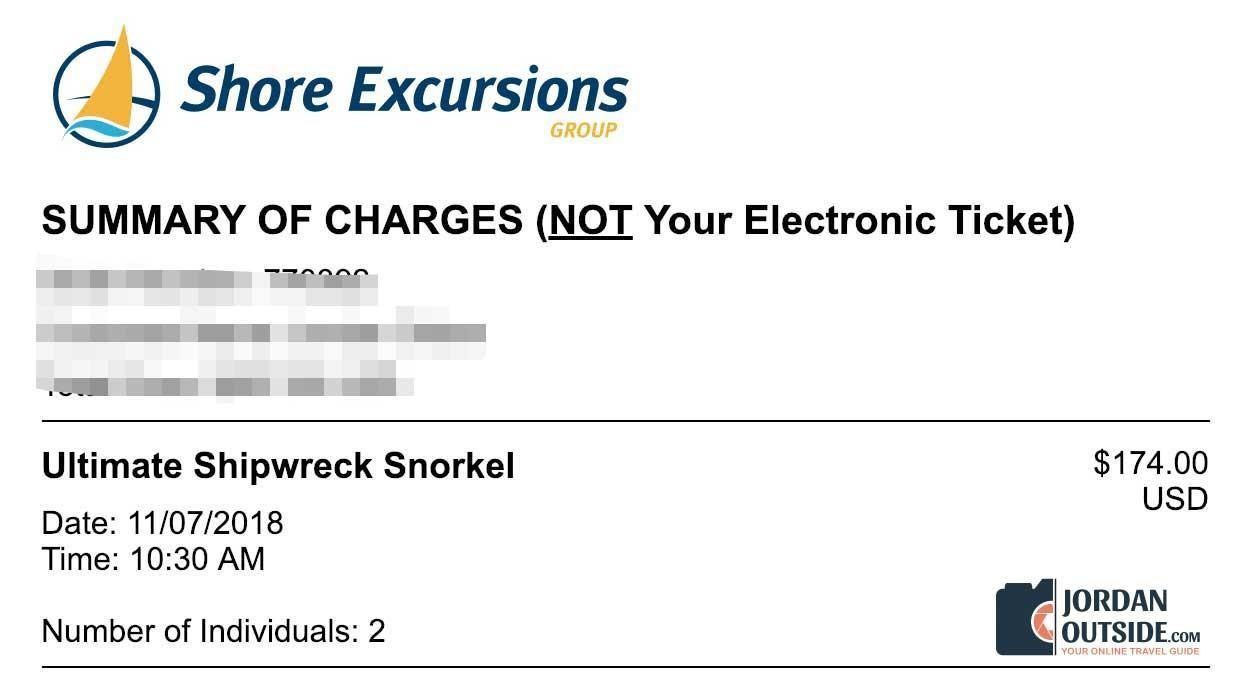 These are the things that I recommend you bring:

Build your own travel lifestyle Website using the same all-in-one platform that I use.

Host your Website, Build Your Courses, and Accept Payments with Kajabi!

GET A FREE TRIAL OF KAJABI